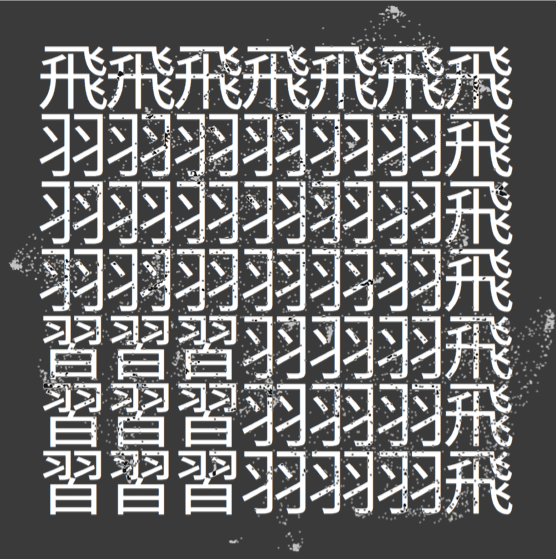 習字 (Graphein) is a series of visual poetic experiments dedicated to an aesthetic computational study of visual and linguistic patterns in Chinese characters. It is a repetitive computational writing practice without the intervention of the human hand. Graphein's graphological and critical attention focuses on the inner structure of Chinese characters in an attempt to bring out visual poetic patterns and defamiliarize the components of a writing system and language itself. Graphein reads in-between the gaps and by way of transitions. It allows certain human readers to re-examine their ownership (or not) of what is supposed to be as familiar and intimate as their own language, or as strange as someone else's. Graphein is the dynamic algorithmic appreciation of an imperfect system that is used by some humans to read and by others to imagine reading.

The word “習字” means the practice of writing, with “字” being the unit of the Chinese writing system and “習” indicating both practice and learning with a hidden message in the necessary process of repetition. The project focuses on two different aspsects 1) the visual rhythm of Chinese characters through composition 2) visual similarities within Chinese characters.